skip to main | skip to sidebar

As 'Studies in Islam' series of books are still the prescribed text books for teaching-learning Islamic Studies in different countries, it is hoped that this blog will be of benefit to the larger Muslim community spread worldwide. The students in UAE can however log in to http://www.muqith.wordpress.com/

This is from the Mercy and Blessings of my Lord

All Praise is to Allah Who guided us unto this; Had it not been for His Guidance we would not have been rightly guided!

SALATUL KUSOOF (Prayer of the Eclipse)

4.  What did the Prophet remark?
The Prophet remarked, "The sun and the moon are two signs of Allah. They do not suffer an eclipse for any man's death or life. If you see them eclipsed, you should glorify the Lord, offer Salah and give charity."

6 What is the Salat-ul- Kusoof?
Salat-ul-Khusuf is the prayer offered during an eclipse. It consists of two Rakahs performed preferably in congregation.

7. How is Salatul Kusoof performed?

1. Before offering the Salah, one must ensure the taharah, purity of the body, the clothes and the place.
2. Make Wudhu (ablution)
3. Face the Qiblah
4. Make the intention in your heart that you are praying Salatul Kusoof.
5. Pronounce the Takbir Tahreema (that is, Allahu Akbar)
6. Recite the Surat-ul-Fatihah and then a Surah, preferably a long surah.
7. Then perform a long Ruku.
8. Rise from the Ruku and say "Samee Allahu Liman Hamidah, Rabbanaa walakal Hamd."
9. Again recite a portion of the Holy Qur'an.
10. This is followed by the second Ruku. This Ruku must be long but shorter than the first one.
11. Rise from the second Ruku, and say Sami'Allahu Liman Hamidah, Rabbanaa walakal Hamd.
12. Perform two Sajdahs, one after the other as in normal salah but each sajdah must be of lengthy duration.
13. Get up and then perform the second Rakah with two Rukus as done before.
14. After performing two sajdahs like before, sit for the Tashahhud and end the Salah with the Tasleem. (that is by saying Assalamu Alaikum Wa Rahmatullah first on the right, and then on the left)

Saluting the Glorious Messenger of Allah

Peace Be Upon Him

Latest from My other Blogs, الحمد لله

SEARCH IN THIS BLOG

SOME WORTH BROWSING WEBSITES

MY SUCCESS CAN COME ONLY FROM ALLAH! 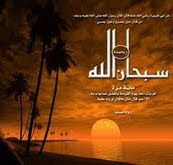 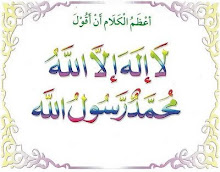 NO IMAN, NO LIFE!